Here is the original article I posted a year ago after this momentous Act was signed. This is a link >> 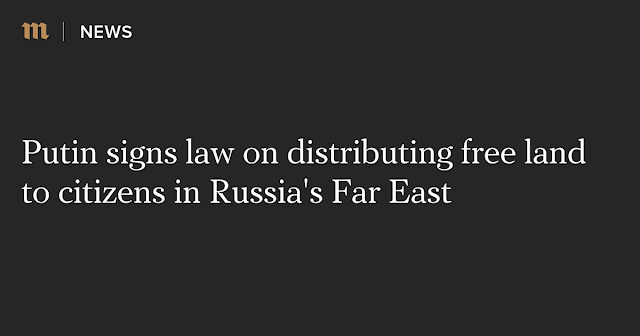 President Vladimir Putin has signed a law on distributing land to citizens in Russia's Far East.

The law states that any citizen may receive a hectare of land in specially designated areas of Russia's Far East. The land may be used for construction, farming or business. After 5 years of use, the land may be rented or bought to own.*

In cases where the land remains unused after 5 years, it is returned to the state. The buying or selling of land that citizens receive for free is prohibited.

The Far East Development Ministry has set out nine areas where the pilot program for the distribution scheme is to take place. There is around 1 million hectares (about 2,470,000 acres) up for grabs in the Far East region of Khabarovsk.

* The meaning gets lost in translation. According to two Russian speakers, this is the incorrect meaning in English. A correct translation for the word "rent" is more equivalent in English to mean a "land tax" or "rates". The idea of "buying" is incorrect. It should probably be translated as "take possession of", but without payment.. 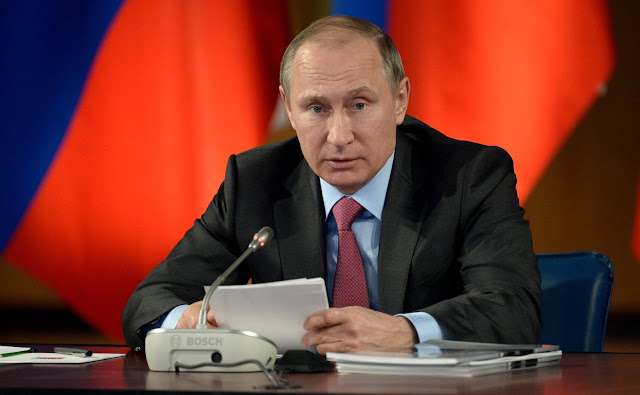 On Monday, May 2, President of the Russian Federation Vladimir Putin signed a law providing the opportunity for any Russian citizen to acquire one hectare of land in Russia’s Far East free of charge. The document has been published on Russia’s official legal information portal.

[Note: The anniversary of this Act is said to be May 1, which in 2016 was a Sunday. The Anniversary of the "Far Hectare Free Land Act" being on May 1 is not lost to Europeans. In many parts of Europe, May 1 is a public holiday "May Day". It is considered the first day of Spring when everything comes to life again, after long and often harsh winter conditions. This also is the symbolism of the Far Hectare Act - it is the springing to life again of social and economic conditions that have suffered a long and hard winter - since c.1300 CE when the Romanization-"Westernization" of Russia happened (through the Orthodox Church) and the land was taken off the people.]

Under the legislation, land is being made available to Russian citizens for their own personal use in the Sakha Republic (Yakutia), Kamchatka Territory, Primorsky Territory, Khabarovsk Territory, Amur Region, Magadan Region, Sakhalin Region, the Jewish Autonomous Region and the Chukotka Autonomous Area.

The size of plot is limited to one hectare and the land is to be made available for five years. Providing there are no reasons not to do so, the land will then be offered for purchase*, provided free of charge, or to rent. **

* The meaning here is unclear. From my understanding, all 1 hectare allocations of "Family Land" in the Far East Region are free. There are exceptions in the legislation such as for land that will be used for forestry operations. For such a situation, the land can never be purchased as it continues to be held under Title by the Region, but you can "hire" the land for your timber business. The people who run such a business would likely apply for 1 hectare of free land as their "Family Land", but also be granted access as a tenant for the use of timber and replanting of trees on nearby forestry land - hence, the use of such words "purchase" or "rent". The usual process for most families is for a gift, in whole.

** There may be a small charge added after 5 years which we in the West call "land tax" or "rates". Apparently, this is a very small amount of money in Russia - Something like the equivalent of US $200 a year for Americans.